The Case of the Missing Bloodstain by Keith Hunter 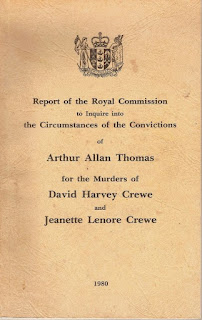 In this well researched and well written book, journalist Keith Hunter explores the 1970 murders of Jeannette and Harvey Crewe and the conviction of Aurthur Allan Thomas for the murders, a conviction that many, many New Zealanders were unhappy with and a conviction that lead to the end of the public`s trust and reliance on the Police and the Justice System to deliver justice when it was found that Thomas had been framed, a mistrust that has whittled away at our system to the point where few rely on it and most doubt its service of good.
The book is gripping and it is to the authors abilities that one can say it is understandable, even I who have struggled with the gun, wire and axle evidence could put it all together under Hunter`s tutelage although I confess it took more than one look at the body retrieval photos before I got it but I did!
There is really no surprise at whom he points the finger of guilt, suspicion has long rested there but Hunter paints his case in bold colours and lays it all out very clearly and really anyone who wanted to get to the heart of the case in 1970 could have done so, it wasn`t really rocket science. The evidence and motive as they stood were quite clear however truth and justice weren`t really what these upholders of the law were after, it was a conviction and a conviction alone that would suit their purposes and so when doubts crept in about the solidness of their case they were propelled to change tack and follow a different path... and from there it all turned to living hell for a farmer and his wife from Pukekawa.
Even with Arthur Thomas`s pardon, compensation and the Royal Commission, with all the books written, films and documentaries, justice still hasn`t been served and it isn`t too late. 1 person should be charged by my reckoning and one person should be made to answer the question in her own words of why she allowed herself to be seen?
Hunter has done a masterful job, he has written an engaging true life thriller, a powerful plea for justice, if justice interests you or you like to read true crime and if you like to play detective, this is the book for you.
Posted by Marion at 2:34 PM

Marion
Never one for cooking and housewife chic I prefer to lock myself away and read a good book..from rock autobiographies to true crime to basically anything .....

The Luminaries by Eleanor Catton