The Search For Anne Perry by Joanne Drayton

With all the pre publicity that this book attracted I was left wondering before I opened the book weather I was actually going to like it or not, I had been looking forward to it but the what ifs crept in, to be replaced by total engagement from page one.
This book is well written, thoroughly researched and a serious biography that is a page turner, hard to find and really who would have thought it.
The narrative zips along and in one of the really powerful tools the writer uses, links and weaves Anne`s story with a particular novel that she has written, a different one for most chapters and in doing so engages the reader in Anne`s journey from the perspective of her life experiences and from her novelistic experiences which works brilliantly.
The reader is engaged initially in the description of  Anne`s home in Darsham and her attempts to forge a living as a writer and establish herself as a part of a community in a remote and atmospheric part of England that she settled in after her long journey from schoolgirl murderer in New Zealand via a number of ports of call.
Drayton is straightforward in her writing, there is little gloss put over the events that were to so shape Juliet Hulme/Anne Perry`s life, although I felt she was a little too kind to Anne`s Mother, who from most accounts was disengaged to a rather unfortunate degree from her daughter as a child and teen.  The book has all the detail it needs to work, all the minutae but it never becomes bogged down, it flows.
I feel that Drayton handled the relationship between Juliet and Pauline with a great deal of sensitivity and also respect towards Parkers family and especially her parents. In researching this relationship, Drayton has obviously taken into account the differing views that the so called experts proffered at the time  and has been very fair in weighing up the power of this relationship for good and bad. It is the Hulme/Parker relationship that most fascinates us and is the point of interest that most will use to pick up and read this book, the story however is much more than this, it is a fascinating journey that we share in and really it doesn`t matter what we think about a certain event, both girls grew into productive adults who really haven`t put a foot wrong since their release from Prison.
It you like Perry`s novels or have followed and read about the case you will enjoy this read and quite honestly if you know nothing at all about Perry`s previous life, this book is so good as a biography that you will enjoy it.
When Perry agreed to co-operate with Drayton, she made a good choice and one would imagine that she will be happy with the portrait painted by Drayton, equally good is that Drayton  hasn`t relinquished her Authorial power to Perry. 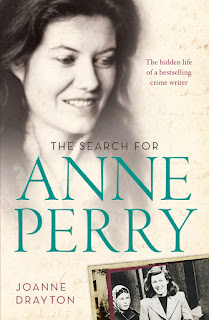 My copy of this book came from HarperCollins Publishers via Booksellers NZ, I thank them for it.
Posted by Marion at 6:03 PM

Can you give me the reason why my comment has been taken off this page.
Who is the chronic Anti - Anne Perry element who is causing trouble.

It was deleted by accident, send it in again and I`ll publish it, anti Anne Perry Brigade have not been a problem on this blog.

Thank you very much Marion. Glad the anti - Anne Perry brigade do not hold sway over you.
There is much dishonesty out there. There are people who write a review against Anne Perry. Comments supporting those reviews are published, but if there are any that put a different perspective on the sorry saga that is different from the 1950's nonsense that is still rampart, it is never published. That dishonesty is in New Zealand as much as anywhere.
That is the reason I had written on this page that it is refreshing to read an honest and unbiased review as yours is.
Sorry for seeming a bit sensitive when my comment disappeared, but now you know why.

Marion
Never one for cooking and housewife chic I prefer to lock myself away and read a good book..from rock autobiographies to true crime to basically anything .....

The Luminaries by Eleanor Catton